There was a spike in my head. It was heavy, maybe about ten pounds or so, rough to the touch, solid and unmoving. It came in through my right eye, resting heavily upon my right cheek like an angry old owl in a tree, staring at the sun reflecting through the hollow it scratched in the back of my skull. Right there in the hollow was a miserable diorama of memories, photos pasted together in fear and self pity, stained in all the days this brutal spike ruined before this one. My right eye was tightly shut, as the entire side of my face was pulled tight like a drum. My pulse was a roaring jet of blood coursing by my ear, pausing only to punctuate with cymbal crashes. 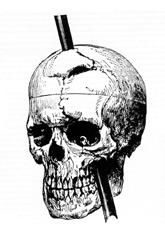 But now, about two hours later, it's gone. It's probably going to come back again: maybe today, maybe tonight, or maybe tomorrow. But for now, there is no greater feeling: the absence of pain that feels like a precious gift returning me to walk amongst the living. My hands that were cradling my face, to keep pieces of self from breaking off from the pain, are free to take hold of this world, and trace again the passing time through my grasp.

It's annoying, right? How happy I am. It's weird that way. The pain is so very horrible that it's mere absence is euphoric. And, even with knowing it will return, like a villain incidentally introduced in the opening scene, I still celebrate like I've somehow cheated death, like I brilliantly hacked the black hole shut. My inner strength, my overflowing karma buckets, providing me with the power to beat the tides of evil? No. In truth, I didn't do a damn thing. Not only that, my only peace is in knowing I can't do a damn thing.

The spike in my head is a cluster headache, and they are supposedly rare and sometimes fatal. Not fatal because they kill you, but because if you are the unfortunate soul for whom they appear daily, multiple times a day, for years on end, you may simply prefer to die. "Suicide headaches" is one name. "Alarm Clock Headaches" is another due to their regularity, predictability, and their penchant for shaking you awake from a sound sleep and wrapping you in a car wreck inside your own brain.

I believe I can measure the various levels of severity as the headache recedes by sizing "what is currently stuck in my head" — the railroad spike turns into a mere lead pipe, then maybe a butcher knife, then a golf club, then a straw. When it's a toothpick, it's barely noticeable, at least at the end of a headache.

For me, the clusters have an 18 month periodicity. They return, ramp up over a few weeks, and disappear quite suddenly. It's easier to mark when they arrive, with the tell-tale locus of pain on the right side alone, but harder to clearly tell when they have left me to circle in their separate orbit around the sun. There's no clear final violent act to the cycle, just a trail of "good days" that line up one by one. When they wander off, I can relax knowing they will be gone for a nearly forgettable amount of time.

Except, like a comet, they just keep coming back around. The first really bad headaches I remember occurred in 2000. Every sinus, allergy, cold, over-the-counter and prescription migraine medication seemed to be the cure. Because the headache goes away on it's own, on it's own clock, whichever last "remedy" I took (Robitussin, FTW!) seemed to be the new magic bullet. But none of them seemed to "work" more than once, and none could keep the next one from coming.

Treatments do exist, and breathing pure oxygen seems to be a favorite. The thing is, well, I have an even longer standing relationship with sleepwalking and fear of dying in a fire. I'll startle from sleep a few times a month claiming to smell smoke, wander through the house looking for a source, until I finally relent and head to back to bed. A tank of oxygen might be useful every eighteen months, but in between let's just say it's sure to be a subconscious source of dreams of my inevitable explosive, fiery demise. Perhaps it is "irrational", but I can't hear you say that when I'm sleeping.

In trying to manage the cluster, I've found peace in knowing that they are very predictable. Not so much that I can plan my calendar around them, but I can learn what to expect and how best to survive.

I'm generally such an optimist that my estimates of both how fast they arrive and how long they last are skewed. This time, with less anxiety in play of "doing it wrong" (i.e. somehow making it worse, or breathless panic that there is some underlying cause), I was able to get a real timing on all of it and for better or worse, it's all much more textbook than I'd remembered.

I had thought that the pain surfaced slowly, over an hour or so, whereas the "classic" cluster supposedly comes on quickly. While that anticipation through the ramp-up — the "is this really a big one or not, should I rush home?" period — seems a lot longer than the fifteen minute curve it truly is. I used to believe the entire cluster episode was about ten days long, when in fact it's actually more like three weeks. Thankfully it's not everyday in those three weeks, and on only a few of those days do I have more than one headache, and being awakened by a headache in full force is still thankfully rare.

People want to help. They want to turn out the lights, or talk a little quieter, or ask if it's stress or too much computer time (STFU), or suggest all the migraine remedies that they saw in Reader's Digest (also frustrating because people still read Reader's Digest). That's sweet, but none of that matters very much at all. People who know someone in this elite < 0.01% cohort know to offer no advice, just a touch of sympathy, and patience.

In fact, knowing there's not much to do but manage the pain isn't bad — it's liberating. It takes away the worry of having caused it, and somewhat the responsibility of "fixing" it, and turns it into a matter of getting through it. Which leaves me in the simpler role of alerting loved ones and co-workers of the fire in the sky, and of carrying a railroad spike in my head for an hour or two, thanks very much I'll be right back when this clears up.

Even though it always comes back, it always goes away. And as much as it hurts, when it goes away it's a truly wonderful feeling.

Comets were once believed to be a bad omen, or sometimes as in the death of Julius Caesar, a sign of divinity — it was so unique in the sky that it simply had to have significance and supernatural meaning for mankind. One day I might know cause and effect. One day, I might even know a cure. But for now, I'm grateful to put a good day in front of yesterday.