I feel like I can still recall the moment I saw it.

It was just one sunset in my lifetime of more than seventeen thousand sunrises.  Back then, before the crisp divide between ocean and sky disappeared behind a blur of little particles and sulphur dioxide, we could all see the edge of the world. And if I was very lucky, I was told, I could see the moment of the crossing of the blue Pacific and yellow sun as a green flash. 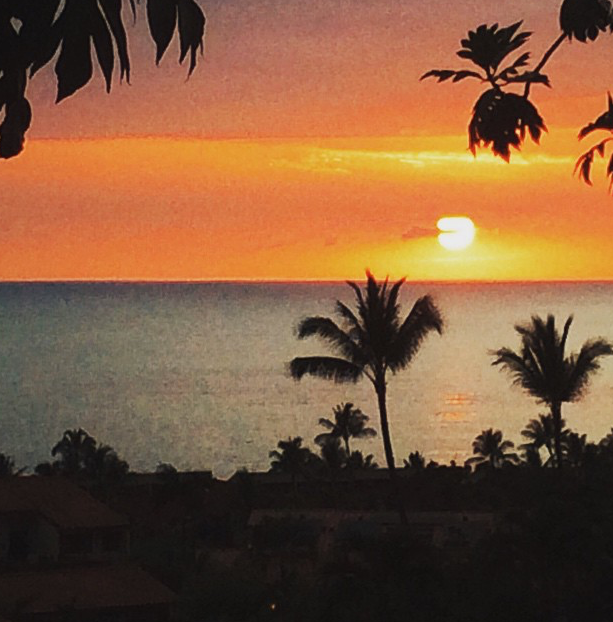 For weeks I had been trying to track that moment when the very tip of the sun dropped into the ocean.  On most days clouds got in the way.  Not the same ones that came around overhead every afternoon for our daily tropical shower, but clouds that were far off on the ocean, perhaps spending their time hiding in the folds of the sky, only visible at sunset as the first shadows of night.

The moment when I saw the green flash, like so many of my favorite childhood memories, came riding in the backseat of the car.  Like the day when I wondered "how does the car know when to start blinking?" and from my vantage point standing up in the back, I could see my brother flick the blinker on his 1964 Ford Falcon with his left pinky. I usually saw him flick a different finger.

"I figured it out!" I screamed, and breathlessly explained my findings that morning as we rode by the old cattle pasture to school.

It was close to that same location, but at the opposite end of the day, in those long ago SALT II Treaty, Bohemian Rhapsody faded years that I turned to look out the car window to see a cloudless horizon.  To be lucky enough to catch a green flash from the backseat, I needed a view of the sun and sea between the passing rock walls and trees.  I needed a view at just the right moment.

The air was heavy with the smell of blood.  At the roadside, next to the old cattle pasture leading up to the school, and tucked amidst family coffee fields, was the local slaughterhouse.  I held my breath, like I always did whenever I passed, waiting for the next clearing to see the plummeting daylight again.

The next view of the ocean was across the pasture land, a slope towards the ocean over a thousand feet in elevation below.  This slope was even more of a functional edge of the earth for me. I'd certainly never even got close to it, although I'd heard stories of how school kids crawled through the tunnels of the flash flood drains that emptied into the field to sneak away from the boredom and tyranny of gym class.

The horizon, at least, seemed to hold some promise of the wider world, The Night At The Opera, on the other side.  But that pasture, and the brush unknown before the rocky shoreline, was where the cows filled the night air with their funeral songs, where the power lines that ringed the road marked the boundaries of where people go. Where bad kids tumbled out of the pipe, covered in spider webs and sweat, filled with the false freedom of sneaking out but never breaking away.

The notion of a normal Kona sunset exploding into a improbable flash of color seemed like a beacon, a call to something invisible over the horizon living in someone else's tomorrow. And then, I saw it — I saw the green flash. Blurry and bold, for less than a second, and it was gone.

Mostly now I remember the triumph of having seen it, the celebration for having captured a view of something so ethereal. Was it an optical illusion, or the blur of the passing tree, or another car's lights through safety glass? It didn't matter, nor does it matter much today.

I live in tomorrow now.