I got caught in the stampede at Penn Station today.

The video in this tweet doesn't capture it - this video was made after the stampede, and was recorded after we had descended back into a nearly empty station, and the people walking by the camera just got off an incoming train (I'm actually a few feet out of view to the right as he took this footage). These people look like they are in a frantic rush, but they probably have no idea what just happened. They are wearing your normal New York City game face and modeling an "I'm walking briskly in Penn Station" angry gait.

When the stampede happened minutes earlier the station was packed, shoulder to shoulder, due to earlier tunnel power problems and the holiday weekend. I didn't hear the "pop" of the taser that others heard, just screaming and a wave of people rushing towards me.

The way the people moved, my first thought was "this is amazing" as the crowd motion looked like liquid surging through the building, like an organic, pulsing mass of particles. There were high pitched screams, and a low rumbling roar, perhaps the thunder of running footsteps, but it sounded like a big machine. It seemed like there was something gigantic pushing through the crowd - what else could cause such force to ripple through these tons of flesh and humanity? What could it be - a rogue Zamboni, someone pushing a shopping cart like a Katamari accumulating travelers, a train crashing through the station? I tiptoed to see, for just a moment, what was pushing the crowd towards me, but I could not see: it was invisible.

After turning to run (and, really, just get the hell out of the way of the few thousand people running towards me), I realized I was getting cornered towards the Amtrak baggage counter in the station. By this point any imaginings of a rogue Zamboni were gone, and I distinctly remember thinking if it was a shooter, I didn't want to be stuck in the station, with little to hide behind. I turned and ran up the stairs.

About a dozen steps from the top was a man who stopped to turn back and say "Slow down, calm down, this is so dangerous." He said it so damn slowly, like he was not from New York, like we had time to listen to his California cool convince us of his rational thoughts, and maybe ripe delicious avocados with a balsamic reduction.

I shouted "Go, go!" into his face like a crew-cut coach into a bullhorn, but he insisted on standing in the way, attempting to lecture people on the danger of panic. He wasn't wrong, thirteen sixteen people were hurt. But he was also in the way. Correction: in my way. I had to wait behind him for a few seconds, but then climbed aboard the wisdom of the crowd and navigated around him and made it out the door. I actually thought about that episode of WKRP when Mr. Carlson realizes what happened out of his view at the Who concert. I bet Mr. Stair Waiter saw that episode, too. Glancing back down the stairs I could see that bags and trash were dumped everywhere, but thankfully didn't see anyone injured on the floor.

Once outside Penn Station, on the sidewalk of 31st and 8th near food carts and a line of ambulances (there to help with riders from the earlier train stranded in the tunnel), I glanced at my phone, seeing the message "There's lots of leftover tofu if you want." I texted back "Panic at Penn, I'm outside and safe, tell you more soon," knowing that Heidi would head to Twitter for the details. I contemplated walking over to the Sam Ash to waste some time since all train travel would be even further delayed anyway, and I really want to play with that Electro-Harmonix Iron Lung vocoder. There's tofu at home, so I wondered if there was a taco cart on the street. But mostly the adrenaline was surging, and I paced on the sidewalk, shaking a bit at the knees.

And then, since this is New York (appropriately read as "this is fucking New York, man"), after only about five minutes, while the cops and EMS workers were still calmly milling about trying to figure out what was going on, we started to make our way back into the station: nobody said not to, and going back in was going back home. Many people were either frightened away or just disgusted at our latest, seemingly weekly problem on our nation's antiquated rails, and left to grab a cab or Uber or bus or another train line. Of those of us remaining, some were on their phone crying and explaining their moments of terror ("I dropped my skis." "Where are you? Come to the door?"); Chris (tweet, above) taking a video; A small squad of teenage skateboarder boys encountering the staff scoldings for the inappropriate timing of their _Jackass_edness. A few joyous reunions and hugs as families found those displaced in the wave. Luggage abandoned everywhere, full plates of food discarded on the floor.

The world's angriest ABM cleaner (and if you ever waited for a train at Penn Station you'd recognize his baritone bellow, often chastising the sleeping homeless) will be even angrier tonight.

I didn't take any photos or videos. The tears and smeared makeup, the pleading phone calls home all happened around me, and my own shaking knees were reasons why I wouldn't need to document the aftermath. The shock value of the trash left behind doesn't come close to getting caught in a tsunami of people, and that moment when you actually believe there may be a Klebold or Roof or James Holmes in the station, and "that time" may actually be now.

But my watch kept track, and in a way, took a picture of me. An inward view, contrasting the daily and the disquieted: 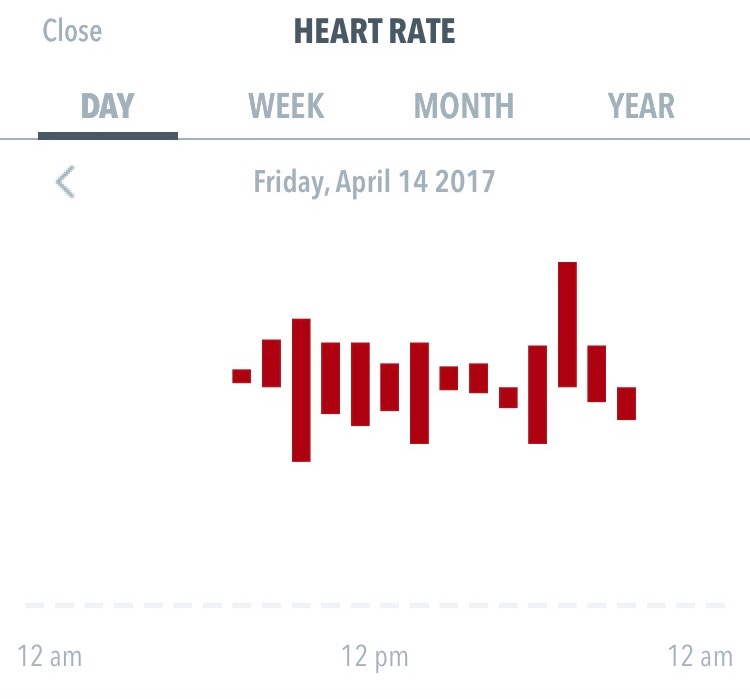 Note the spike in the six o'clock hour, on Friday, April 14, 2017. I note too, most gratefully, the heartbeat continuing beyond.